A Little History of Your Thanksgiving Feast

You are here:
EventsLocal 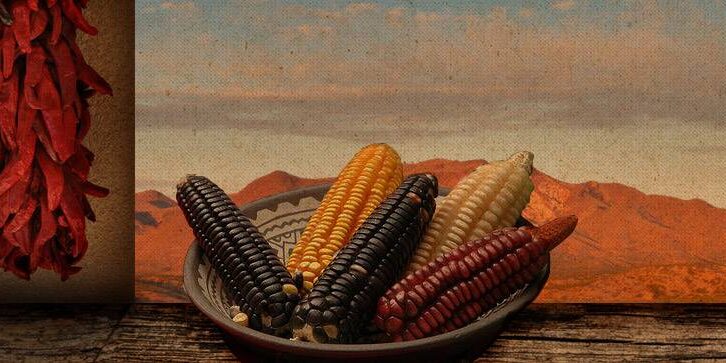 Food is culture here in New Mexico, and I’m sure your Thanksgiving table this year will include at least one New Mexican dish. For most of us, these dishes have been in our families so long we can’t recall a time when they weren’t there.

But all cuisine has to start somewhere, and we were curious enough to find out just where a few of our beloved New Mexican dishes came from. Here’s what we found:

Enchiladas originated in Mexico, where the practice of wrapping food in tortillas dates back at least to Mayan civilization. Mayans living in the lake region of the Valley of Mexico traditionally ate corn tortillas folded or rolled around small fish or other bits of meat. According to Mexico Adventure, there is evidence that they would fry the tortillas in grease, then put them on a plate and pour salsa over the top, add cheese, then another tortilla, cheese, salsa and so on. They would then top the stacked enchilada with a fried egg and some lettuce.

Posole is believed to have originated with, or at least been popularized by, the Aztecs. The Aztecs considered maize (a main ingredient in posole) a sacred plant, and therefore posole was designated for special occasions.

Now, the following sounds a little crazy to me, but who am I to argue with the National Institute of Anthropology and History? Apparently, because the Aztecs believe god made humans from masa, the meat used in the posole was sometimes human…Yes, I find this disturbing, too. As if this weren’t bad enough, the Aztec’s supposedly used the flesh of prisoners. The meal was eaten communally as an act of religious communion. Thankfully, the Spanish Conquest of the 1500s banned cannibalism, and pork became posole’s staple meat. Phew.

Now, let’s move on to a more appetizing topic.

I’m sure you’re familiar with green chile, New Mexico’s official vegetable (though it’s actually a fruit until harvested), and it will no doubt be part of your spread this Thanksgiving. But, the deliciously spicy pepper was burning mouths long before it became the defining feature of New Mexican cuisine (and your Thanksgiving dinner). 10,000 years ago the Aztecs, Incas, and Mayans were all harvesting chiles. In that time too, there has been fierce debate over how to spell “chile,” with variants including chilli and chili. New Mexicans, who know it’s spelled “chile,” will be happy to know that former New Mexico Senator Pete Domenici entered the “the correct way to spell “chile” into the Congressional Record. Who knew?

The tamale has been recorded as early as 7,000 BC in pre-Columbian history. Initially, Aztec women served in battles as cooks, and made tortillas, meats, and stews. But prepping the corn was an arduous task and became even more so as battles intensified. So, the women got creative and made more portable food, which led to the creation of the tamale. They could be prepped ahead of time, and because tamales are all wrapped up in a cornhusk, they were easier to carry and heat up.

The history of albondigas, or meatballs, dates back to the 6th century, when Islamic influence dominated southwestern Europe. In the 13th century, the King Ferdinand and Queen Isabella of Spain conquered the region and many Muslim culinary traditions were integrated into the Spanish community. From there, albondigas made their way to Mexico by way of the conquistadors. Also, albondigas were limited to the wealthy, since meat was a precious commodity. Eventually though, because albondigas were so popular, the poorer classes found ways to make them too.

What are some of your favorite Thanksgiving dishes? Do they have a special meaning or history in your family? Tell me in comments section below.