You are here:
CommunityHolidays & Celebrations 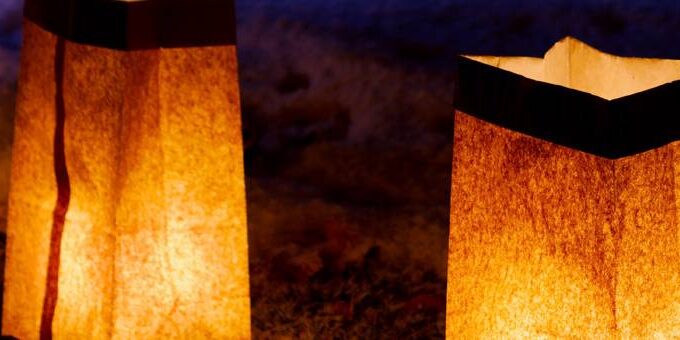 As a native Santa Fean who’s lived in several other cities in the U.S., I’ve come to firmly believe that there are two types of Christmases: Santa Fe and everything else. Christmas in Santa Fe is, in my opinion, more unique and more precious than Christmas in any other city.

It smells different, for one thing. The scent of burning piñón fills the crisp, high desert air, and envelopes you no matter where you are. You could be snowshoeing on Raven’s Ridge or shopping the wares of Native Americans on Palace Avenue — the fragrance is omnipresent.

It’s especially in the air on Canyon Road, a winding trail of art galleries ornamented for the season with luminarias — paper bag lanterns filled with sand and a votive candle — and weather permitting, a dusting of snow. If you visit Canyon Road on Christmas Eve, you’ll likely encounter a bustling scene of tourists and locals, all with rosy cheeks and noses, and bundled up in warm coats, hats, and mittens. Thermoses filled with hot cocoa or cider release curls of steam into the single-digit air and tiny fingers clasp broken-off pieces of biscochitos, an anise cookie traditional at Christmas time.

Paths of luminarias run far beyond Canyon Road. Follow the serpentine line of lanterns down to the town’s center, the Plaza, and along the way you’ll see they line nearly every sidewalk, rooftop, balcony, and overhang. When you arrive at the Plaza, you’ll discover a courtyard trimmed with hundreds of twinkling Christmas lights. The precious scene is, at first glance, the least “Santa Fean” of all the city’s Christmas settings, that is, until you spy the many chile ristras hung amid the lights, and in the recesses and windows of thick-walled inns, the glass panes backlit by firelight. You’ll also encounter old pickup trucks — some parked for display, others transitory — festooned with strings of lights and tinsel.

Meanwhile, you’ll hear the hisses and refrains of Las Posadas, a procession-style reenactment of Mary and Joseph’s search for lodging to give birth to baby Jesus. A large crowd holds candles and follows the holy couple as men dressed as devils taunt the procession from the Plaza rooftops. The devils repeat several lines at each stop, one of which is “Váyanse de aqui,” which translates to “get out of here.” But all ends well. The couple finds lodging in the Palace of the Governors courtyard, and a celebration ensues. A band plays, refreshments are served, and the crowd takes photos with the actors who played Mary, Joseph, and the devils. (Arguably, the devils get asked for more photo ops.)

Las Posadas finishes in time for folks to head home for dinner, where the aromas of posole simmering on the stove, tamales steaming in the crockpot and blue-corn tortillas warming in the oven, waft through the air.

It’s back out again, however, on Christmas Eve, for the city’s most devout Catholics, along with many nonreligious locals and tourists alike. They leave the warmth of their homes and stream into the Cathedral Basilica of St. Francis of Assisi, for Midnight Mass. Yawns are stifled and parents with children up well past bedtime hover near the doors, as anticipation swells for the church’s evening of pomp and circumstance.

St. Francis also holds an annual mariachi mass on Christmas morning, for those too weary, or, admittedly too cozy, to attend Midnight Mass.

Also on Christmas Day, 25 miles south of Santa Fe, crowds gather at Kewa Pueblo, formerly Santo Domingo Pueblo, for its public Feast Day dance. The pueblo’s town square — a large dirt plaza — becomes what New York Times writer Patricia Leigh Brown, once described as a “Cecil B. De Mille-scale production of the spirit.” Hundreds of dancers stomp the earth in unison to the sonorous voices of singers and the pulsing of drums.

Visitors will do well to remember, however, that despite the dances’ majesty and beauty, it isn’t a public performance. Rather, it is a religious ceremony, and therefore guests are asked to behave respectfully. In other words, camera phones away, please.

Where you can take pictures, however, is high up on Santa Fe Ski Basin, where Santa Feans, a particularly outdoorsy bunch, flock to enjoy the powdery snow and sunny blue skies, afforded by the arid climate. Between runs down the mountain’s silky trails skiers and snowboarders stop in to clink glasses and refuel on green chile stew at Totemoffs, a bar and grill nestled among the trails.

Sore and weary skiers soothe their aching muscles at Ten Thousand Waves, a Japanese-style spa and bath house, conveniently located at the base of the mountain. Many of the resort’s private hot tubs are outdoors so that you can soak in the magic of a starry night sky or, even better, an enchanting snowfall.

After a deep soak, locals retire to their homes (stomping the snow off their boots before they enter) while tourists stock up on tortillas and green chile from Kaune’s or Albertsons, and devise creative ways to stash the goods in their luggage.

Though, admittedly, tourists aren’t the only ones who do the aforementioned. I’ve stashed packages of tamales (frozen and wrapped in layers of saran and bubble wrap) in my suitcase on many a Christmas, back in the days when I lived in Boston or Washington, DC. Transporting spicy contraband onto an airplane was my way of taking Christmas in Santa Fe — an experience I have yet to find anywhere else — with me wherever I went.

What to Do and See