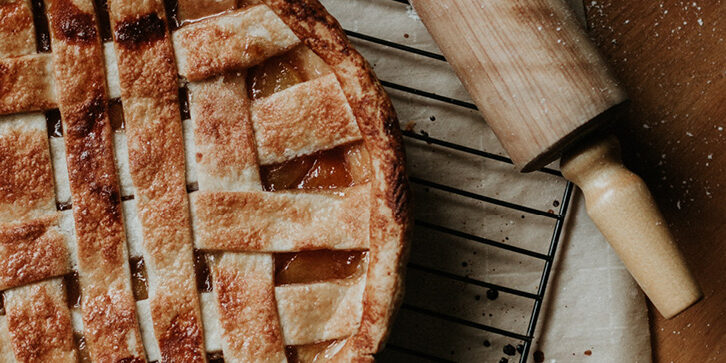 For many dessert fans, any day is a good day for pie. However, this fruit or custard-filled delight gets its day in the spotlight on January 23—National Pie Day. According to urban legend, the country-wide celebration started in the mid-1970s when nuclear engineer, brewer, and teacher Charlie Papazian declared his birthday as National Pie Day. If you’re ready to join in the tasty occasion, here are 10 New Mexico pie shops to patronize.

Chief baker Andrea Villegas-Bernal founded Las Golondrinas Pie Company in 2018. She brought her family’s agricultural background to the endeavor. Supporting New Mexico’s farmers by sourcing fresh, local ingredients is key to her mission—and making her seasonal pies so delicious. The changing menu has featured standouts like New Mexican Chocolate, which tastes like Mexican hot chocolate; salted honey custard; and dulce de leche pumpkin. Order pies for pick up directly from the shop or via the Railyards Market.

The Chocolate Maven has been serving Santa Fe sweet treats for more than 50 years. It first started as an intimate eatery known for brownies, hot chocolate, and late-night poetry readings. Five decades later, it has been featured on the Food Network, remains a perennial “Best of Santa Fe” winner in local reader polls, and ships nationwide. The dozen-strong pie menu includes favorites like wild blueberry, chocolate cherry, and Dutch cranberry apple.

Jean and Mark Bernstein launched the first location of their Duke City chain (then called Double Rainbow) in 1987. Since then, Flying Star, and its offshoot Satellite Coffee, has spread its wings across central New Mexico thanks in no small part to the drool-worthy pastry case that greets customers at each location. The Bernsteins operate a separate dedicated bakery to feed diners’ demands for favorites such as classic apple pie, strawberry rhubarb pie, and the decadent Rio Grande Mud pie, in which a chocolate cookie crust is packed with rich chocolate filling, and topped with house-made caramel and fresh whipped cream.

Pie Town earned its name thanks to a 1920s bakery that specialized in dried-apple pies, and the town on U.S. 60 west of Socorro has carried on the tradition since. Its famous pie stop, Pie-o-neer Pies, has finally reopened, making it once again the best place in town to stop for a slice. Enjoy a taste at the pie bar, or order whole pies to take home.

This aptly named bakery (it is indeed located in a blue house) serves hearty breakfasts and lunches; however, no trip here is complete without a slice of pie. Classic flavors include cherry, blueberry, and New Mexico apple, complete with a Zia symbol carved in the sugar-dusted pie crust top.

Housed in a 1941 historic apple barn where the Cloud-Climbing Railroad once loaded shipments of locally grown apples, this throwback shop has vintage charm. The Old Apple Barn includes a soda fountain, an emporium, a fudge counter, and a bakery where the area’s favorite crop shines in an apple crumble pie. The barn is open year-round; however, it’s always wise to call ahead to ensure they’re open before making the trip.

Indulgence Bakery & Cafe lives up to its name with a sprawling menu of decadent desserts, all of which are available for takeout. Key Lime tart, coconut cream pie, lemon supreme pie, Dutch apple pie, and peach pie all have regular spots on the menu, but you can call ahead for daily specials and offerings.

Glenn’s has been a Gallup go-to since it opened in 1972. With the Chavez family at the helm since 1980, it has become a popular eatery (try the green-chile cheeseburger) as well as a favorite for its pastry case packed with donuts, fritters, cakes, and more. The menu changes frequently, but it often features custard-filled pies, such as banana cream pie.

Michael’s has been serving Taoseños and tourists hearty breakfasts and lunches since 1974. Even with a belly full of breakfast burrito, few diners escape the restaurant without stopping by the pastry case, which features jumbo-sized danishes, cinnamon rolls, eclairs, and cream puffs. It also features pies, served whole or by the slice, and available to go. Traditional flavors include apple, blueberry, cherry, French silk, lemon meringue, peach, and pumpkin.

This quaint lunch-only eatery on the edge of Midtown Ruidoso serves soups, salad, and sandwiches—as well as some of the best pie in town. Most customers of The Village Buttery opt for the Famous Buttermilk Pie, a creamy confection packed with flavor, however you won’t go wrong with other menu offerings either, such as key lime and pecan.