10 Diners Worth Driving For 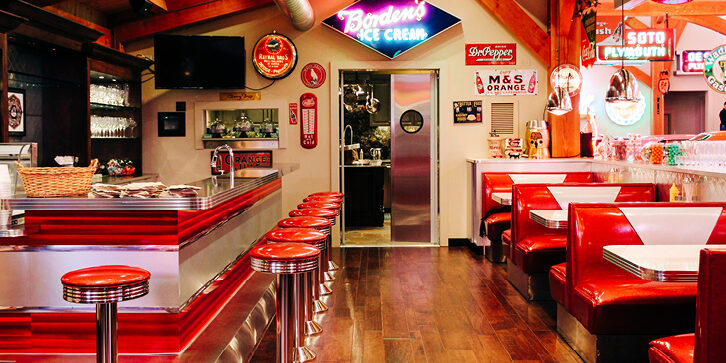 No matter how refined your palate, sometimes good ol’ diner food hits the spot. Bring on the burgers, sandwiches, piled-high papas, and other soul-soothing comfort dishes. New Mexico has a hearty helping of greasy-spoon joints. Here are 10 diners, drive-ins, and dives worth visiting, even if your meal calls for a road trip.

Since 1992, this City Different staple has been dishing up hearty portions of comfort food. Everything’s made from scratch and, while unpretentious, entirely delicious. Breakfast favorites include chilaquiles and blue-corn waffles. The wide-ranging lunch and dinner menus include everything from a turkey Rueben to house-smoked ribs. The roadhouse got the official hat tip from “Diners Drive-Ins & Dives” on season five of the Food Network show.

El Salvadorian chef/owner Jesus Ribera and wife, Charlotte, serve comfort foods like stuffed French toast at this neighborhood joint. But with an El Salvadorian chef behind the grill, there’s plenty of his homey favorites on the menu, too, including pupusa with flank steak and banana-leaf-wrapped chicken or veggie tamales. Triple D host Guy Fieri certainly enjoyed these dishes when he visited while filming season 5 of the Food Network hit.

The first Laguna Burger location was an I-40 gas station at Exit 144 on Laguna Pueblo, but its green-chile cheeseburgers earned such a fan following it opened a restaurant in Albuquerque. The back-to-basics burgers have likely earned renown for quality ingredients, which start with certified Angus beef, a locally baked bun, and New Mexico–grown chile.

The sammies from this downtown shop may seem simple, but they’re built with meat that’s slow-roasted sometimes for a dozen hours. The result is melt-in-your-mouth bites rich with flavor. Chef Marie Yniguez is the mastermind behind stacked sandwiches such as the Duke City Ruben with corned beef and house-made kraut, and Big Dipper with beef and caramelized onion. She’s competed on several Food Network shows, including “Chopped,” which she won, and most recently “The Great Food Truck Race.” Although she didn’t come home with the grand prize on that show, participating inspired her to open her own food truck, Smokin’ Freds ’46.

Chef Josh Gerwin sources primarily local ingredients for the Dr. Field Goods wide-ranging menu that includes everything from veggie burritos to bowls of pho featuring house-made bone broth. Its pizza was in the spotlight during a season 30 episode of “Diners Drive-Ins & Dives.” A pop-up in the Sawmill Market brought local meats and the craft of butchery to Albuquerque. Don’t leave without trying the patatas bravas, fried potatoes smothered with red, green, or Christmas-style chile aioli, sharp cheddar cheese, with New Mexican gremolata.

This family-owned and operated eatery specializes in chile-smothered New Mexican favorites for breakfast and lunch. However, it’s hard to escape the larger-than-life cinnamon rolls, eclairs, and other delights in the pastry case. Tip: Don’t leave without a dozen (or a few dozen) freshly made flour tortillas to take home with you. You can watch them churn out from the tortilla machine while you eat.

Rumor has it that Buddy Holly loved to eat at the Foxy when he was in Clovis making albums the Norman Petty Recording Studio just across the street. Even if the menu isn’t endorsed by a famous singer, it’s still tasty. You’ll find all the drive-in classics here, from burgers and corndogs, to buckets of fried chicken and steak fingers. Pull up in your car and plan to indulge.

At Earl’s the diner atmosphere comes with a side of art; local Native American jewelers and craftspeople are invited to sell their creations tableside. The food is diner standard, from burgers to BLTs. The Indian taco, served on fry bread, is a must-try.

Founded in 1989, this family-owned and operated joint prides itself on great food and service. The breakfast offerings include piled-high plates of biscuits topped with hash browns topped with bacon, sausage, eggs, and smothered in green chile and gravy. Lunch includes burgers and Southwest takes on the classics, like a green-chile laden French Dip.

We hope you have many tasty meals ahead at these diners from around the state! Who did we miss? What are your favorite local diners? Tell us in the comments!