You are here:
Auto LoansRelaxation & Recreation 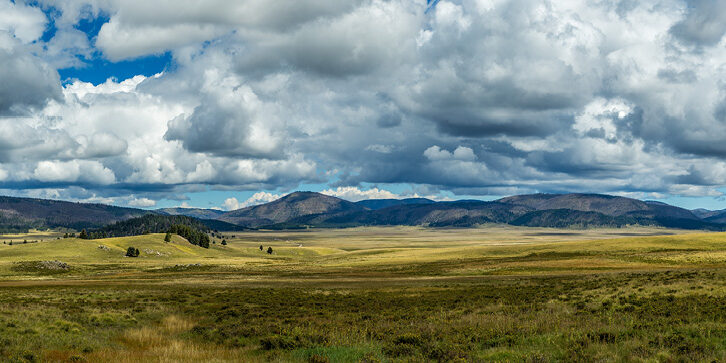 Summer vacation season is here! However, with the COVID-19 pandemic lingering, some travelers may feel concerned about visiting unfamiliar places. Cue the scenic drive, where the journey is just as important as the destination. Pile into the car because it’s time to see the picturesque landscapes that earn the Land of Enchantment its nickname. Here are seven of the best byways to follow in New Mexico.

Following a network of highways on the slow climb between Santa Fe and Taos, this route travels past Pueblos and villages dating to Spanish Colonial times. The drive will bring you past Santuario de Chimayo, which is best known for El Posito, a hole in the chapel floor filled with healing dirt. It’s hardly the only stately church on this drive. In Truchas, the more than 200-year-old Nuestra Señora del Sagrado Rosario Mission Church greets visitors. Las Trampas boasts one of the finest surviving mission churches in the state, the 1760 San Jose de Gracia church. Finally, the trip ends with the San Francisco de Asis church in Los Ranchos de Taos. The route also winds through small towns known for their craftsmen and the rolling hills of the Carson National Forest.

Beginning northwest of Bernalillo at San Ysidro, this byway cruises toward Jemez Pueblo, where stunning red rocks edge the road. Pueblo guides lead tours into the canyons if you want to explore. On to Jemez Springs, you’ll find natural hot springs (both in resorts and in nature) and fantastic hiking trails. As the road continues, it passes Fenton Lake State Park and heads on toward the Valle Caldera National Preserve, where you can take in views of the caldera’s wide, grassy meadows even from the road. Pine-studded peaks enclose the highway as you drive on toward Bandelier National Monument, home to centuries-old cliff dwellings.

Connecting Santa Fe and Albuquerque, this sinuous drive coasts through juniper- and piñon-dotted foothills and quirky coal-mining towns turned art enclaves. The road passes Cerrillos Hills State Park, where turquoise was mined as early as 900 A.D., making it one of the oldest mining areas on the continent. Most travelers complete the trek by cruising straight between I-25 and I-40. However, to make this a truly picturesque trip, follow N.M. 536 to the Sandia Mountains crest. As the road climbs, it leads to hiking trailheads and, from the top, epic views of the Rio Grande Valley.

The Rio Grande Gorge is one of northern New Mexico’s most spectacular sights. The 800-foot-deep rift runs from the Colorado state line south to nearly Española. Along the way, the Wild Rivers Backcountry Byway traces 13 miles of the rim. The road overlooks the stunning volcanic canyon and leads to spectacular overlooks, such as at the confluence of the Rio Grande and Red Rivers, and 500-year-old juniper forests.

This short, but charming, byway travels from the mountain retreat town of Cloudcroft into the Sacramento Mountains. Cruising for 16-miles, the road ends in Sunspot, where two famed national telescope observatories await. Towering pines bookend the road, occasionally opening to sprawling views. Most visitors retrace their steps to Cloudcroft, but you can also continue through the Lincoln National Forest to Timberon.

Taking its name from one of the Wild West’s most legendary characters, this 84-mile drive loops through destinations that take you back in time to The Kid’s heyday, past beautiful mountain scenery, and more. Starting in Ruidoso, the route travels toward Alto. The towering snow-capped Sierra Blanca Peak — southern New Mexico’s tallest — is always in view. Traveling toward Capitan, you’ll enter Smokey the Bear Country, home to both a museum and historical park honoring the real-life symbol of wildfire prevention. The byway then travels through Lincoln, a time-capsule town where most of the town’s buildings are part of the state historic park there. The Lincoln County Courthouse is still marked with bullet holes said to be made during Billy the Kid’s daring escape. You’ll drop into the Hondo Valley, where the highway traces the Rio Bonito through lush orchards and iris farms. In San Patricio, you’ll be able to appreciate the stunning landscapes that inspired the work of famed New Mexico painters from the Hurd and Wyeth families.

Ready to hit the open road?

State ECU can help you get road-ready with our summer auto loans. Reward yourself with $150 cash in your pocket and 120 days of no payments when you purchase or refinance your auto loan before August 31.