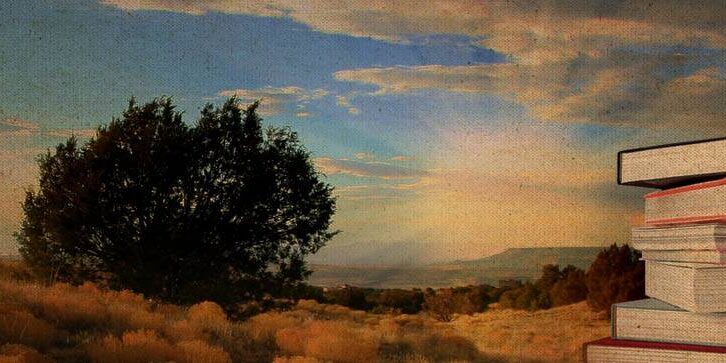 AMC’s award-winning series, “Breaking Bad,” put New Mexico on the map probably more so than any other entertainment media (for better or worse, we’ll let you decide). And while we love pointing at TV and saying, “I’ve been there!” (here’s looking at you, Octopus Car Wash), we also enjoy literature that paints a picture of our great state. Here, we rounded up the best fiction books set in New Mexico :

“Some places are too good to be true. Under a pink moon, there is a perfect little town not found on any map. In that town, there are quiet streets lined with pretty houses, houses that conceal the strangest things. After a couple years of hard traveling, ex-cop Mona Bright inherits her long-dead mother’s home in Wink, New Mexico. And the closer Mona gets to her mother’s past, the more she understands that the people of Wink are very, very different…From one of our most talented and original new literary voices comes the next great American supernatural novel: a work that explores the dark dimensions of the hometowns and the neighbors we thought we knew.” – Goodreads.com

“Bless Me, Ultima” by Rudolfo Anaya

“Antonio Marez is six years old when Ultima enters his life. She is a curandera, one who heals with herbs and magic. ‘We cannot let her live her last days in loneliness,’ says Antonio’s mother. ‘It is not the way of our people,’ agrees his father. And so Ultima comes to live with Antonio’s family in New Mexico. Soon Tony will journey to the threshold of manhood. Always, Ultima watches over him. She graces him with the courage to face childhood bigotry, diabolical possession, the moral collapse of his brother, and too many violent deaths. Under her wise guidance, Tony will probe the family ties that bind him, and he will find in himself the magical secrets of the pagan past—a mythic legacy equally as palpable as the Catholicism of Latin America in which he has been schooled. At each turn in his life there is Ultima who will nurture the birth of his soul.” – Goodreads.com

(If you’re a New Mexico native, you probably read “Bless Me, Ultima” in high school. It’s never a bad idea to re-read this classic, though. Unlike high school, however, now you can skip the book altogether and watch the movie version, which came out in 2013).

“The classic coming-of-age story set during World War II about the enduring spirit of youth and the values in life that count.” – Amazon.com

“So Far From God” by Ana Castillo

“Sofia and her fated daughters, Fe, Esperanza, Caridad, and la Loca, endure hardship and enjoy love in the sleepy New Mexico hamlet of Tome, a town teeming with marvels where the comic and the horrific, the real and the supernatural, reside.” – Amazon.com

“Death Comes for the Archbishop” by Willa Cather

“There is something epic—and almost mythic—about this sparsely beautiful novel by Willa Cather, although the story it tells is that of a single human life, lived simply in the silence of the desert. In 1851 Father Jean Marie Latour comes as the Apostolic Vicar to New Mexico. What he finds is a vast territory of red hills and tortuous arroyos, American by law but Mexican and Indian in custom and belief. In the almost forty years that follow, Latour spreads his faith in the only way he knows—gently, although he must contend with an unforgiving landscape, derelict and sometimes openly rebellious priests, and his own loneliness. One of these events Cather gives us an indelible vision of life unfolding in a place where time itself seems suspended.” – Goodreads.com

“Edward Abbey called The Monkey Wrench Gang a ‘comic extravaganza,’ which it is, although one with a clear, serious message: to protect the American wilderness from the forces of commercial enterprise. The story centers on George Hayduke, an ex-Green Beret and Vietnam vet, who returns to the Southwestern desert after the war to find his beloved canyons and rivers threatened by industrial development. On a whitewater rafting trip down the Colorado River, Hayduke joins forces with three others who share his indignation and want to do something about it: feminist saboteur and Bronx exile Bonnie Abzug, wilderness guide and outcast Mormon Seldom Seen Smith, and libertarian billboard torcher Doc Sarvis, M.D. Together they venture off to become eco-raiders, waging war on the strip miners, clear-cutters, and the highway, dam, and bridge builders who are turning their natural habitat into a wasteland. The misadventures of this motley group make for an uproarious blend of chaos, conflict, and comedy.” – Goodreads.com

“The Last Beautiful Days of Autumn” by John Nichols

“The second and centerpiece in a trilogy of memoirs that John Nichols wrote about his first fifteen years in Taos, New Mexico.” – Goodreads.com

“New York school teacher Charlotte Lambert is practical and predictable, and never allows life to veer off course. Until she comes to New Mexico. During one summer in Agua Dulce, a village haunted by a phantom herd of wild horses and where ravens embody the spirits of ancestors, Charlotte’s world is upended as she unearths the details of her mother’s forbidden love affair, chilling murder, and courageous last act of redemption. Pursued by a madman hell-bent on killing her, Charlotte finds shelter, romance, and her own misplaced soul at the desert camp of a surprisingly sophisticated cowboy, and learns how love in its myriad forms is the only path to lasting salvation.” – Goodreads.com

I’m sure there are plenty of great books about New Mexico that we haven’t listed here. What is your favorite book about New Mexico? Tell us in the comments section below.