Gobble Gobble – Don’t Be a Turkey about Thanksgiving 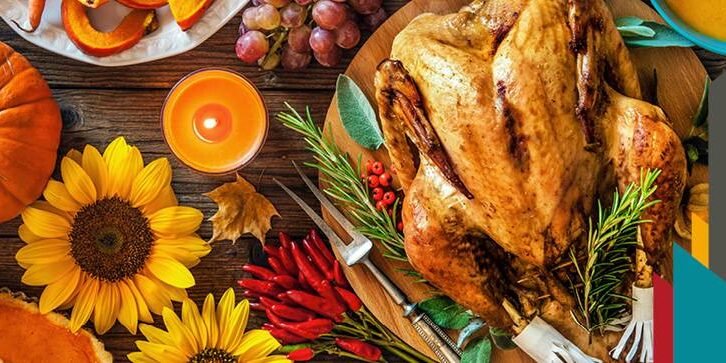 Another Thanksgiving is upon us, and another year to roast the turkey, prepare the trimmings, and make the ultimate pumpkin pie. Ever think about why these particular foods are on your table? Do you think it is because that is what the pilgrims and Native Americans feasted on almost 400 years ago? Well that isn’t quite accurate.

What was on the 1621 menu?
We do know from letters from Englishman Edward Winslow that colonists in Plymouth, Massachusetts and the Wampanoag had an autumn harvest in 1621. (But the History Channel states that historians argue that St. Augustine, Florida may have been the true first Thanksgiving in 1565 featuring Spanish settlers and Timucuan people.) According to Smithsonian Magazine, there would have been wildfowl, venison, and corn in grain form on the menu in Plymouth. And whatever else was served takes some conjecture. According to a food historian at Plimoth Plantation, a living history museum in Plymouth, turkey was most probably not the central entrée as is today. They suspect that goose or duck may have been the centerpiece. In addition, the Wampanoag were also known to have eaten eels and shellfish, so that could have been on the menu. And since the colonists did not have butter and wheat flour, there would not have been any types of pie. Potatoes had yet been introduced to North America, so nix the mashed or sweet potatoes. And cranberries would take another 50 years to be served as a relish; and it would take until 1912 for the first canned jellied cranberry sauce to be available.

Who started the modern version of Thanksgiving?
The holiday as we know it didn’t take hold until the mid-19th century. And it is credited to Sarah Hale, editor of a popular women’s magazine. She lobbied for a “thanksgiving holiday” for many years before Abraham Lincoln made it a national holiday in 1863. But she printed recipes and menus in her Godey’s Lady’s Book and published many cookbooks, thus cementing the menu in the minds of the country’s women—roast turkey, potato dishes, mashed turnips, creamed onions, stuffing, and pumpkin pie. Think of her as a 19th century trendsetter like Oprah or Martha Stewart. (Fun fact: Hale co-authored the famous “Mary Had a Little Lamb.”)

Which president started the turkey pardon tradition?
It wasn’t President Lincoln, although there is a story out there about him pardoning a Christmas turkey. And President Kennedy once did say “let’s let this one grow” giving a turkey in effect a pardon. But the tradition of a president officially granting a pardon on the family turkey started in 1989 with President George W. Bush.

Why is football a Thanksgiving tradition?
According to the History Channel, this holiday match up was in play long before there was an NFL, when college teams from Yale and Princeton went head to head in 1876. “And by the 1890s, thousands of college and high school football rivalries were played every Thanksgiving.”

When was the first Macy’s Thanksgiving Day Parade in NYC?
Ranked among the most popular of all the holiday parades, the very first Macy’s parade took place on in 1924 with 250,000 people in attendance. Today more than 3.5 million people line the streets to watch the spectacle—as well as 50 million TV viewers nationwide. (Fun fact: local New Yorkers know that the real joy is watching more than 30 signature parade balloons get blown up the night before on streets of the Upper West Side of Manhattan.)

No matter what recipes and ingredients you choose in your personal holiday menu, we hope your holiday is delicious and warm, with lots of family and friends gathered around the table. It is a nice idea to have everyone say what they are thankful for and count your blessings!