You are here:
Health and WellnessLocalRelaxation & Recreation 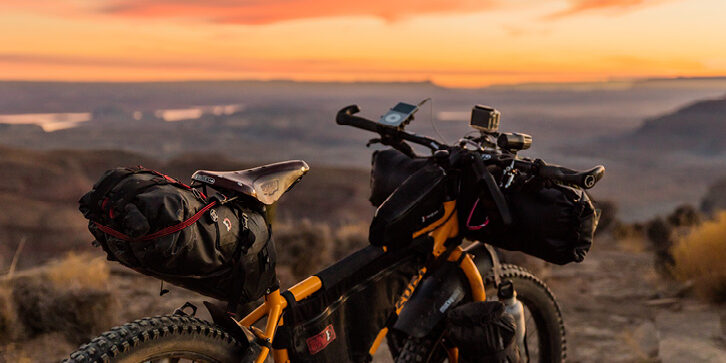 Whether on asphalt or mountain trails, riding on two-wheels is one of the best ways to explore New Mexico. The Land of Enchantment earns its nickname with landscapes of sweeping plains, studded buttes, and towering peaks. You can tour all these via bike — if you just know where to go. Here are some of the best places to ride, plus a few clubs and outfitters to help you gear up and get out there.

Mount Taylor
This out-and-back ride travels from Grants to the top of Mount Taylor. It follows part of the route for the Mount Taylor Winter Quadrathlon, an annual bike-rune-ski-snowshoe race. The first part of the ride treks along pavement on N.M. 547; however, you’ll soon be in the mountains riding through pine forests along a maintained dirt road. The route is a bit of a climb, but you’ll earn a leisurely cruise on the way back.

South Boundary Trail
A 23-mile trail between Angel Fire and Taos, this route is a jewel among New Mexico’s trails. The first part of the trail requires a hard climb; however, once you ascend, it’s a rolling single-track with a long descent back to Taos. It’s not just the route that may have you huffing and puffing. This high-elevation trail begins at 8,700 feet and reaches 10,800 at the highest point. The views are worth the effort. The track opens up to views over conifer and aspen forests. Since the path starts and ends at different points, most riders arrange a shuttle for trailhead drop off and pick up.

Angel Fire Mountain Bike Park
If you’re looking for a concentration of great trails, you’ve found it in Angel Fire. With 60 miles of routes and a variety of terrain, including drops, technical challenges, jumps, and rolling single-track, this park stands out as one of the best in the country. It has even hosted professional races.

“A” Mountain Loop Trail
In Las Cruces, “A” Mountain both town landmark and mountain-biking destination. A 4.5-mile trail loops around the hill’s base offering mixed terrain of hard-pack, sandy arroyos, and rocky sections. It’s a good trail for beginners to start out on. Advanced riders will enjoy it for timed rides.

White Mesa Bike Trail
Outside of San Ysidro, 43 miles west of Albuquerque, this single-track cruises through a stark, alabaster landscape of rocky outcrops. The eight-mile trail is quite exposed, so it’s fitting for fall, winter, and spring excursions.

Santa Fe to Ski Santa Fe
This 30-mile ride begins at Santa Fe’s Fort Marcy Complex and wends up N.M. 475, aka Hyde Park Road, to Ski Santa Fe. As it climbs, it twists and turns through piñon-strewn foothills, pine forests, and stands of aspen. (This ride is particularly scenic in fall when the aspens blaze golden.) Once you’ve ascended from 7,040 to 10,300 feet, you’ll return the way you came. If you don’t want to make the whole trip, you can turn around at Hyde Memorial State Park, which marks the half-way point.

Sandia Peak Summit
This climb from Cedar Crest, outside Albuquerque, to the Sandia Peak, is a favorite among local cyclists. The route climbs 3,000 feet in 15 to 17 miles, so you’ll likely stay in low gear for this ascent. From the peak, you can take in hundreds of miles of the picturesque Rio Grande Valley below. The descent is a rapid ride.

Mesilla Valley
This leisurely, 24-mile, flat jaunt explores the Mesilla Valley outside of Las Cruces. New Mexico’s agriculture is on full display as you pedal past pecan orchards and perhaps a chile field or two. Starting at New Mexico State University’s Pan American Center, head out of town on N.M. 28 to La Mesa, where you’ll turn around and follow the same route back.

Enchanted Circle
Follow the path of the Enchanted Century Circle Bike Tour, one of the most popular annual cycling races in the state, along this cruise through northern New Mexico. The route departs Red River on route to Questa. Then you descend toward Taos, which cues a climb over the Garrapata Ridge, where the landscape changes from mountains to mesas. From Taos circle into Arroyo Hondo and El Prado, then head back to Red River.

Santa Fe Century
The Santa Fe Century is one of the state’s most popular and longest-running (30 years and counting) cycling races in the state. Even if you’re not competing in the official event, you can follow all or part of this 100-mile route south from Santa Fe toward Madrid. You’ll turn east in Cedar Crest and head toward Stanley. Then turn north again to pedal past Galisteo, Lamy, and El Dorado before returning to Santa Fe. Along the way, you’ll cruise past historic turquoise mines, artist hamlets, and scenic rolling foothills.

From the Taos Mountain Bike Association to the Santa Fe Fat Tire Society, cycling clubs across the state plan group rides and can provide advice to riders who are just getting started. The Mountain Bike Project catalogues all the state clubs.

If you’ve completed all the rides described here and need more, the New Mexico Touring Society {https://www.nmts.org/rides.php} keeps a directory of routes and group rides you can join. New Mexico Cycling is another great resource for information on group rides and racing events around the state.

Whether you’re a first-time rider or practically pro, bike shops are go-to sources to purchase gear, rent bikes, and get recommendations on places to ride. Many cities across the state have a local bike shop. Popular outfitters in Albuquerque, Santa Fe, and Taos include The Bike Smith, Spin Doc, and Gearing Up Bicycle Shop, respectively. Enjoy the ride!