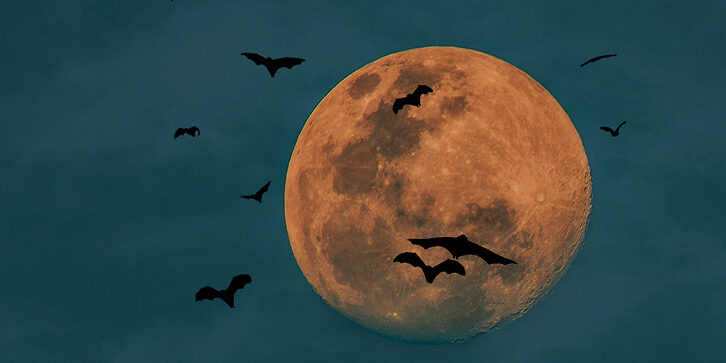 October is the spookiest month. It’s when most places celebrate ghosts, ghouls, and goblins. But New Mexico has its own breeds of folk monsters. Inherited from the state’s Spanish, Latin American, and Native American roots, the fearsome stories may have been created — or at least artfully embellished — as warnings for naughty children. Parents have handed down these stories through generations. Many of today’s New Mexicans grew up with these tales and still tell them as bedtime stories. Here are a few of the state’s favorite folk legends.

Inherited from Latin American folklore, the story of La Llorona, aka The Weeping Woman, differs depending on who tells it. Some of the key points remain the same: Hundreds of years ago, a woman named Maria had two children. Either after catching her husband with another woman or in response to being abandoned by him, in a fit of rage, she drowns her children. Realizing her error, she immediately calls out for her children. In grief, she then drowns herself, but her spirit is caught on Earth where she searches endlessly for her children along waterfronts. The story transforms from the tale of a mourning woman to the cause of jumpy walks along rivers when it adds this: If La Llorona can’t find her own children, she’ll grab any she can find.

Many New Mexicans will swear they’ve seen this animal themselves. It’s the southern equivalent of Big Foot in its legendary status and its elusiveness. Descriptions of the creature vary, but it’s often portrayed as a large, hairless canine. Sometimes, however, it’s described as a lizard-like hybrid with spines trailing down its back. Every account calls out the animal’s vampirism; it’s said to suck livestock blood, and in particular goat blood. The name comes from the Spanish words chupar (“to suck”) and cabra (“goat”), aka “goat sucker.”

New Mexicans often think the release of cottonwood seeds is evil, if only because the pollen aggravates their allergies. But in New Mexico folklore, these seeds become a legendary creature. La Malogra is said to be made of cottonwood fluff that gathers into a ball that rolls through the forest. It’s said to smother any children it finds out at night, which is reason enough for kids to stay safely tucked in bed.

Equivalent to the boogeyman, El Coco is a formidable figure because it’s said to kidnap children. Once they are spirited away, many tales say El Coco devours them. But well-behaving children need not fear. El Coco only seeks children who misbehave and don’t obey their parents. Several 17th-century nursey rhymes describe El Coco as a lurking shadow outside children’s windows and instruct\ them to go to sleep before the boogeyman gets them. These rhymes sound more likely to cause nightmares than rest, which is perhaps why El Coco has held children’s imaginations over the centuries.

The thunderbird is a legendary creature in many indigenous cultures. These supernatural beings who ruled the skies become a modern-day urban legend when the story collides with observable facts. Teratorns, prehistoric birds that were the ancestors of today’s vultures, once flew over New Mexico. Their skeletons measure wingspans of 20 feet and they are thought to have weighed more than 100 pounds. The bird flew during the Late Oligocene and Late Pleistocene eras, and it is assumed to be extinct. However, witnesses reported seeing the birds flying over the Land of Enchantment until the 1800s. Some even say they’ve seen extraordinarily large birds in the Doña Ana Mountains, outside Las Cruces, today.

These tales may or may not be true but retelling them certainly adds to the mystery and spooky fun of the season!