7 Places to Make a Splash in New Mexico 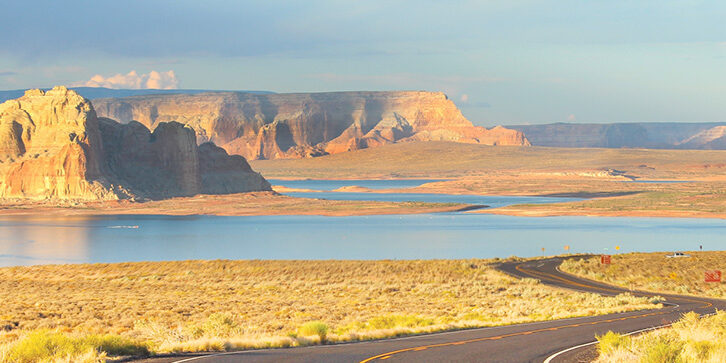 As summer temperatures hit triple digits, many New Mexicans are searching for ways to cool off. Even in the state’s high-desert landscape, there are plenty of lakes and rivers where you can take a dip — or at least splash around. Here are the top seven water destinations in New Mexico.

New Mexico’s largest water reservoir stretches 40 miles across southern New Mexico outside the small towns of Elephant Butte and Truth or Consequences. Its sandy shores and campgrounds are chock-a-block most weekends from Memorial Day to Labor Day. Watercraft enthusiasts love cruising past the lake’s namesake formation (a butte that looks like an elephant near the center of the lake) in motorboats, cruisers, pontoons, jet skis, and kayaks. Few people can resist a plunge into the lake itself, though most swimmers prefer the safety of secluded coves to take a dip.

Navajo Lake State Park stretches its branch-like arms across northwest New Mexico outside Farmington. It’s the second largest lake in the state, which is also home to multiple onshore campgrounds, two marinas, and two docks. Over the past few years, the windy conditions in this corner of the state make the lake a hotspot for wakeboarding and windsurfing, which inevitably involves a few tumbles into the cool waters.

In most of the state, the Rio Grande cruises low and slow toward the Gulf of Mexico. However, in northern New Mexico, and particularly through the Rio Grande Gorge, the river is a tumult of white water. Rafting trips with outfitters through the famous Taos Box, a 16-mile stretch outside Taos, often leave paddlers soaking from the spray of Class IV rapids. It’s a way to cool off and a grand adventure all in one.

The second of a duo of lakes south of Chama (the other is El Vado), Heron Lake State Park is one of the few in the state that’s safe for swimming anywhere. On this “quiet lake” boats have to operate at low, no-wake speeds. That leaves a pristine environment for paddling, fishing (look for record-setting trout and kokanee salmon here), and swimming. It’s also a perfect place to float on an inner tube through the heat of the day while sipping a lemonade.

This bell-shaped pool appears out of the desert in Santa Rosa like a blue sapphire. With incredibly clear water, visibility extends up to a hundred feet. At 79-feet deep, it attracts scuba divers both amateur and certified to explore. It also attracts snorkelers, cliff jumpers, and casual swimmers who want to cool off.

Roswell’s connection to an alleged 1947 UFO crash may earn it descriptions as otherworldly, but the surprising pools 14 miles southeast of town at Bottomless Lakes State Park truly earn the adjective. Here, the landscape is dotted with sinkholes ranging from 17 to 90 feet deep. The only one that’s open to swimming is Lea Lake. There, turquoise waters and a sandy beach may remind you more of an island paradise than a southern New Mexico desert. Buoys designate a swimming area where lifeguards are on duty.

Another surprising watery marvel flows south of Carlsbad. This day-use area within the Lincoln National Forest has pavilions and picnic tables for gatherings, but the star attraction is the waterfall itself. The spring-fed fall crashes 150 feet into a large pool of water where visitors can wade among the ferns and other water-seeking plants as they seek respite from the heat.

We hope you enjoy these destinations for a refreshing dip this summer!