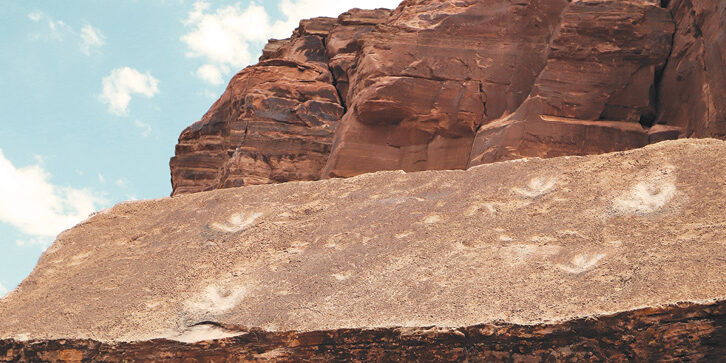 It may be difficult to picture today, but dinosaurs once roamed New Mexico. In the Jurassic period, the southwest’s dry climate was home to dinosaurs such as Allosaurus, Stegosaurus, and long-necked sauropods. During the Cretaceous period, much of what is now the Land of Enchantment was submerged in water, but on land, dinosaurs, including Tyrannosaurus rex, dominated. Today, those fascinating creatures are long gone, but evidence of their presence remains—much to the delight of dino-loving kids and their families. Here are six destinations around the state for families to unearth New Mexico’s past.

This homespun museum at Mesalands Community College keeps things local with displays of specimens gathered in the area. It houses a variety of replicated and original fossils, including footprint casts of the 40-foot long Torvosaurus, a carnivorous relative of Tyrannosaurus rex. Visitors can also view paleontology students and the curator preserving fossils through an observation window in the exhibit hall.

Established in 2009 on Bureau of Land Management public land, this monument protects a major deposit of fossilized footprint tracks. They date to the Paleozoic era (some 280 million years ago) and cover approximately 5,280 acres of desert with amphibian, reptile, insect, and plant impressions. Hiking is allowed at the monument, however, there aren’t any interpretation sites for the fossils. To learn more, you’ll need to head to museums in Las Cruces or Albuquerque.

This small-but-packed museum in downtown Las Cruces displays exhibits highlighting desert life, New Mexico’s connection to the space race, and paleontology. The latter exhibit highlights the fossilized trackways that dot the Permian Basin, including the previously undiscovered creatures who walked the clay at the Prehistoric Trackways National Monument leaving their footprints for the ages.

The largest natural history museum in the state, travels back in time to the Big Bang and tracks the evolution of the earth’s creatures since. Recreated fossils of long-necked sauropods and immersive exhibits depicting what New Mexico likely looked like during the Cretaceous period star in the exhibit halls. Fossil Works, where visitors can watch volunteers and paleontologists preserving specimens, is another must-see during your visit.  Several of the fossils from the Prehistoric Trackways National Monument, outside Las Cruces, were removed and stored at this museum in the Jerry MacDonald Paleozoic Trackways Collection. Public tours of the collection are available by reservation.

Clayton Lake State Park draws visitors for boating, camping, fishing, and hiking amid the rolling grasslands of northeastern New Mexico. With little light pollution here, it’s also a renowned destination for night-sky viewing and even earned a designation as an International Dark Sky Park. There’s also another amusement for dino lovers: one of the most extensive dinosaur trackways in North America. These trackways have been instrumental to paleontologists in understanding dinosaur movement and migration patterns, and the dinosaurs’ behaviors and social interactions between parents and offspring.

New Mexico’s official state fossil, Coelophysis, a small, bipedal, carnivorous dinosaur, was found in the rust and beige buttes around Ghost Ranch. It’s the same landscape that served as muse for Georgia O’Keeffe, but paleontologists found equal fascination here—particularly in the 1947 Ceolophysis Quarry that preserved several thousand skeletons of its namesake dinosaur as well as other Triassic vertebrates. Coelophysis was the first of two dinosaurs discovered at the ranch. The second, Tawa Hallae, another theropod from the Late Triassic period, was unearthed in 2009 in the Hayden Quarry. (Both look the more famous Velociraptor.)  The Ruth Hall Museum of Paleontology exhibits each of these creatures and gives insights into the digs that discovered them.

Due to COVID-19 precautions, it’s always wise to verify attractions are open and their operating times before visiting. We hope you enjoy this blast from the past road trip!