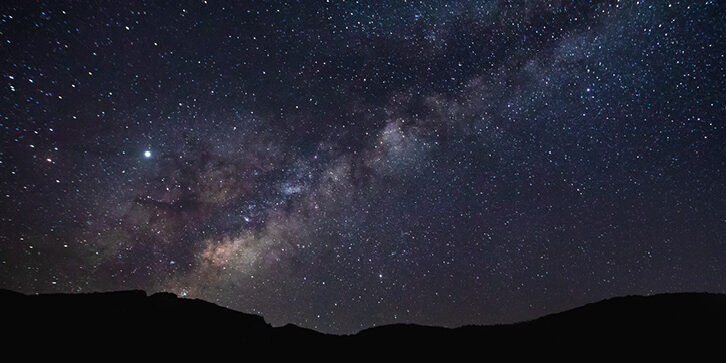 Clear skies are a hallmark of New Mexico—even at nighttime. The International Dark-Sky Association has given a hat tip to five destinations across the Land of Enchantment as top places to see dark, unpolluted skies. Here are the best places in the state to go stargazing this summer.

This national monument is part of an expansive volcanic field in northeastern New Mexico. The main feature is the Capulin Volcano, a cinder cone that rises more than 8,000 feet above sea level, far from city lights. Hikers can take in views from four different states (New Mexico, Oklahoma, Texas, and Colorado) from the volcanic rim, and the views at night are even more expansive. The topography of volcanoes and buttes here helps screen even distant sources of city lights making for top star gazing conditions at the park. According to the International Dark Sky Association, “The Park is situated in one of the darker locations in the lower 48 U.S. states, and as a result it presents night skies that are nearly pristine under typical conditions.”

This state park is best known for its eponymous lake and some 500 fossilized dinosaur footprints and tail prints. However, it also earned New Mexico’s first International Dark Sky Park designation in 2010. Ensconced in the northeastern plains away from the yellow haze of light pollution that can obstruct night sky views, the park offers clear skies for spotting constellations like Ursa Major. With a newly installed Meade LX200, 12-inch telescope, it offers even better looks at celestial phenomena during star viewing parties.

The ancient Puebloans who lived in the great masonry houses now protected within this national park kept careful track of astronomy. In fact, lunar and solar cycles, as well as the placement of stars and planets affected where they built their great houses and other landmarks in the area. So, the designation of this park as an International Dark Sky Park in 2013 only recognized the long tradition of sky gazing here. Today, park rangers open the park’s observatory several nights a week and offer talks on how the ancient Puebloans’ celestial observations informed their daily lives.

This monument protects a handful of the best-preserved Spanish mission churches in the continental U.S. The 17th-century churches are set in three separate locations, at Quarai, Abó, and Gran Quivira, with the latter also protecting the remains of the Las Humanas Village. Visiting all three sites makes for a scenic road trip across the Salinas Basin near the town of Mountainair. Although Albuquerque’s city lights can often cast a haze over this International Dark Sky Park, the park still offers stellar views. Park rangers offer interpretive programs on how our modern views might differ from those indigenous peoples and early Spanish missionaries saw here several hundred years before the metropolis sprung up to the north.

This is a top camping spot for amateur astronomers. Set off of U.S. Highway 180 between the towns of Alma and Reserve in southwestern New Mexico, this small campground is the first International Dark Sky Sanctuary in the Northern Hemisphere. The nearest town is 25 miles away, so there’s no artificial light for at least that far. As darkness falls, exceptional dark skies emerge. The Gila National Forest campground has four hard-surface pads, so if you have a telescope you’ll have great terrain to set it up for stargazing.

Although these parks and destinations usually host star parties during the summer, during which amateur and professional astronomers show visitors celestial phenomena through telescopes, many of those have been put on hold during the COVID-19 pandemic. However, at these destinations, you’ll be able to see superb sights, including the Milky Way, planets, and constellations, with your naked eye.

Other Places to See the Stars:

If you have a budding astronomer in the family, add these destinations to your list. (Check ahead for COVID-19 closures.)

Planetarium and Astronomy Center at the New Mexico Museum of Natural History and Science, Albuquerque
Daily shows on the 55-foot Sky-Skan Definiti, full-dome theater show off the universe.

Very Large Array, Socorro
Usually open to the public for tours on the first and third Saturdays of the month, this collection of radio antennae has been featured in Hollywood movies like Contact.

Sunspot Solar Observatory, Sunspot
Perched high in the Sacramento Mountains outside Cloudcroft, this is one of the largest active solar telescopes in the world. It’s usually open to the public daily.

Robert H. Goddard Planetarium, Roswell
This planetarium takes its name from the father of rocketry. It displays the story of our cosmic origins in an immersive, full-dome theater several days a week.