You are here:
Arts 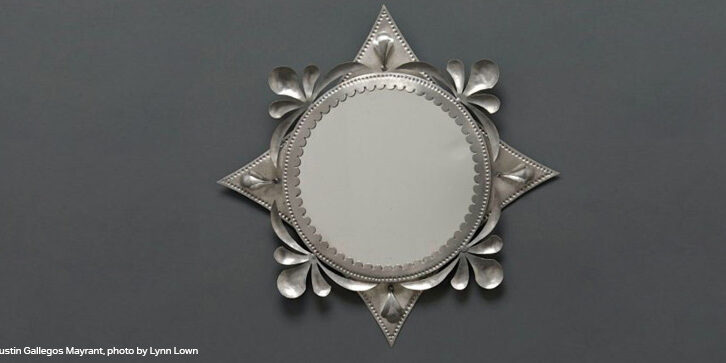 Tinwork has become synonymous with New Mexican folk art. Just think about all the tin ornaments, mirrors, tissue boxes, etc. that you probably have around your home. But the art form has evolved from its early days to today, where it is much celebrated as a Spanish Colonial art that is both rich in history and influenced by northern New Mexican ingenuity.

Tinwork has a direct link to Hispanic colonists who brought their skills and knowledge to rural New Mexico. In the early 18th century, they mainly applied their artistic talent to religious items for New Mexican churches. This was during a time when tin was hard to find. And since tin was expensive and had to be imported from Mexico, the number of tinsmiths was few.

But the craft kicked up a notch with the steady stream of people traveling west on the Santa Fe Trail. Why? Because as large quantities of food and goods made their way west, the goods were often packed into five-gallon tins, such as for lamp oil. These tins were considered to be a godsend to resource-starved artists in New Mexico while they were considered trash to the rest of the country. With the influx of inexpensive (or free) materials, artisans could expand their repertoire. Ornamental tin folk art grew to include mirrors, candle holders, nichos, kids’ toys, and more. The relative isolation of New Mexico is thought to also play a role on the creative development of the art form. And the period 1860-1890 is cited of as the golden age of tinwork in New Mexico. But as the 19th century wound down, demand wound down, too.

However, in the 1930s, a revival of sorts grew for Spanish colonial arts, and the Spanish Colonial Arts Society was founded. And with this movement, came a renewed appreciation for tinwork. The large tin cans had disappeared as more economical packaging became the norm, so tinsmiths worked with rolls of tin, called terneplate. And the new age of tinwork craftspeople continued to evolve with an increased availability of tin frames, lamps, and mirrors—that today are a big part of “Santa Fe style” home décor. Today, New Mexican tinwork is much in demand. Tinwork arts are a strong component of Spanish Market (sponsored by the Museum of Spanish Colonial Art) in both the traditional and contemporary areas. Spanish Market is the oldest and largest juried Spanish market in the United States. And tinwork continues to be supported (and revered) by this important arts network.

Tools employed in traditional tinwork are simple, such as a hammer, small tin punches, tin shears, and a soldering iron. However, the process to create a work of quality takes many years of training and experience. In addition, many tin artists design their own punches, which becomes their signature or fingerprint. Objects like chandeliers and furniture inserts require a mastery of skills and can fetch upwards of thousands of dollars.

State ECU: In what ways do you see the medium evolving and what traditions are crucial for authenticity?

Justin Gallegos Mayrant is a highly regarded tin artisan who came into the folk art fold in a different manner than most tin artists, who are often 3rd, 4th, or 5th generation. This Santa Fe-based tinsmith has been a participant in Spanish Market for 22 years, but was the first member of his family to work in tin and Mayrant says he was the first member of his family to be an artist. He found a mentor who helped him bridge that gap and was schooled in the traditional methods. “I was shown genuine traditional work and learned how to build them from scratch.” He says that after he honed his skills he then found his own style, creating an interpretation of traditional tinwork—while still using and honoring traditional tin and techniques. “I now am known for relief work rather than punch work—and for my minimalist look. I use a more sculptural approach to my pieces.” When Mayrant does use tin punches, he designs them himself. “And my mentor makes them for me,” he adds.

Richard Gabriel is a prolific award-winning New Mexican tinsmith who also teaches a number of classes around the state. Gabriel says that hand tools are crucial to keeping tinwork an authentic New Mexico folk art. “In today’s world of machine cutters and benders, a piece of tin art that is handmade has much more of a connection to the artist and buyer than a “cold” machine made piece.” He says that the tradition is evolving and calls his work “Next Gen.” “My work is rooted in the traditional but the functionality of a piece serves a modern need (switch plate covers, cell phone charger holder, etc.)” He also notes that different metals such as copper and brass are expanding amongst tin workers. “I have recently added the use of rusty found “antique” tin to some of my work.”

State ECH: Why does tinwork have such a long-lasting appeal?

Mayrant sees a two-pronged explanation for the appeal of New Mexican tinwork. One is that because of the inherent materials used in tinwork and the fact there are still many historical examples that have survived—and inspire artists today. “They hold up over time.” He also says that unlike many other art forms in the realm of Spanish Colonial Art, tinwork has a much less faith-based approach. “I think that people from all different cultures can appreciate the work and it has widespread appeal.”
“I think tinwork has lasting appeal mostly but not exclusively because of its decorative/functionality aspects. Many of my collectors make room for a piece based on the fact that it is functional, i.e. a mirror for the bathroom,” says artist Richard Gabriel.

Thanks to Justin and Richard for sharing information with us about this wonderful New Mexican tradition!

Want to try tinwork yourself? A good way to start exploring tin punching is by making simple things like holiday ornaments. Online sources have a number of great tutorials and ideas for beginner tin punch activities. I especially liked the step-by-step lesson on Wikihow for punched tin luminarias made out of recycled tin cans. You can also find a number of helpful videos on YouTube. And Etsy has a bunch of tin punch patterns and kits for sale at reasonable prices.

Richard Gabriel’s Tin Birdhouse class at Santa Fe Community College allows students to create their own bird feeder or birdhouse in a one-day workshop. It runs April 28, from 6-9 p.m. and the fee is just $39.

For a special experience, head to Medina Gallery, located in the placita of El Santuario de Chimayó. There you can take a two-hour workshop with tin artist Sharon Candelario, who runs her collectible art line Black Etched Tin and is a participant in Santa Fe’s Contemporary Spanish Market. Her workshops focus on the traditional Rio Arriba style of tinsmithing and Candelario supplies all the tools, supplies, and instruction. In warmer months, students can work on the patio in the shadow of the iconic mission, making the experience even more special. “Workshop participants end up with an ornamental piece that they can take home and enjoy,” she says. She explains that she offers workshops one-one-one or as a group; to arrange for a workshop you can contact her via her website. (The workshop costs $95 per person.)

And don’t forget to support your local artists. This summer’s Santa Fe Spanish Market is scheduled to take place in Santa Fe July 25-26 on and around the Santa Fe Plaza—and best of all it’s free!

Artists’ Enchantment With American Southwest on Display in Taos
May 17, 2016