You are here:
Local 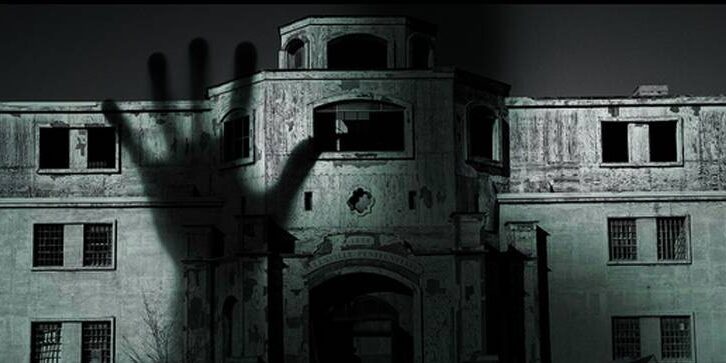 So, if you are feeling braver than usual this year, might we suggest checking out one of five infamous New Mexico haunts we are about to list?

Go on, we double-dog dare you…

(I’ll just be here hiding under a pile of blankets).

Few places in America’s Wild West circa 1880 were wilder than Cimarron, New Mexico, where law and order were basically non-existent. It was in this setting that Henri Lambert (later Henry), former personal chef to President Abraham Lincoln, founded the St. James Hotel, which comprised 43 guest rooms, a restaurant and a saloon. The saloon quickly gained a reputation for being a violent place, as was evidenced by the many—some accounts say 400—bullet holes in the ceiling. Noteworthy guests include Clay Allison, Thomas Edward ‘Black Jack’ Ketchum, Jesse James, and Buffalo Bill Cody.

It is estimated that 26 people violently died within the walls of the St. James Hotel, and that several of their ghosts have stayed behind to haunt the premises. Room 18 is forever padlocked because it houses the angry ghost of Thomas James Wright, who was shot and killed shortly after winning the rights to the hotel in a poker game. Wright’s ghost allegedly pushed down a former owner while she was in the room. It’s been locked up ever since.

The ghost of Julia Staab, a late-1800s Santa Fe socialite, is said to haunt this resort hotel in downtown Santa Fe. In her day, Staab was the “queen of Santa Fe society,” and held lavish parties in her mansion that is now part of La Posada. Staab shared the mansion with her husband, Abraham, one of the wealthiest men in New Mexico, and their seven children.

The Staabs led a happy and prosperous life, until the death of their eighth child, a daughter, shortly after her birth. The child’s death sent Julia into a deep depression, and she became a recluse, barely leaving her bedroom on the second floor. According to legend, her immense grief caused her raven hair to turn gray overnight. Staab died in 1896, at just 52 years of age, and has been haunting La Posada ever since. (The property was remodeled into a hotel in the 1930s, and a series of Pueblo Revival-style adobe casitas were built around the existing Staab mansion.)

Many guests, hotel employees, and passers-by have claimed to see the ghost of Julia Staab. According to Legends of America, one of the first recorded reports in 1979 tells of an employee who was cleaning late into the night and looked up to see a beautifully dressed translucent woman standing near a fireplace. According to this Unsolved Mysteries episode, in 1991, the voice of Julia Staab called out “I’m in here!” after a hotel clerk knocked on the door during a guest tour.

A riverbank or creek at night (La Llorona)

One of New Mexico’s oldest, and most chilling, ghost stories is of La Llorona (Spanish for “weeping woman”), the spirit of a grieving mother who traverses New Mexico’s creeks riverbanks in a flowing white nightgown, forever crying and searching for her two sons whom she drowned in a fit of jealous rage. Children are warned not to be by a river late at night, else La Llorona will snatch them and pull them down into the water.

The old New Mexico State Penitentiary just outside Santa Fe is the site of one of the most violent and bloody prison riots in American history. Inmates took 12 prison guards hostage and tortured them, meanwhile pillaging the facility and gruesomely murdering fellow prisoners. A total of 33 prisoners died during the riot, which lasted two days. The penitentiary is now out of commission, but its doors remain open for tours.

This haunted hospital was first a military base during WWI (then called Camp Cody) and then converted by the Sisters of the Holy Cross into a tuberculosis sanatorium during WWII. Today only the ruins of one building remain, as the rest were lost in a fire in 1939. In the 1980s, the ruins served as a popular site for satanic cult rituals like animal sacrifices. The ruins are believed to be haunted by a century of disgruntled ghosts and spirits, and legend has it that if you graffiti your name on the wall you will die within the year.

Me, I think I’ll just stay in and watch Hocus Pocus (that’s about as scary as I can handle) with a bowl of popcorn this All Hallows Eve. But, to the more courageous folks out there who plan on patronizing some of New Mexico’s spookiest landmarks, I say: good luck, pack a flashlight, and be sure you can run fast!