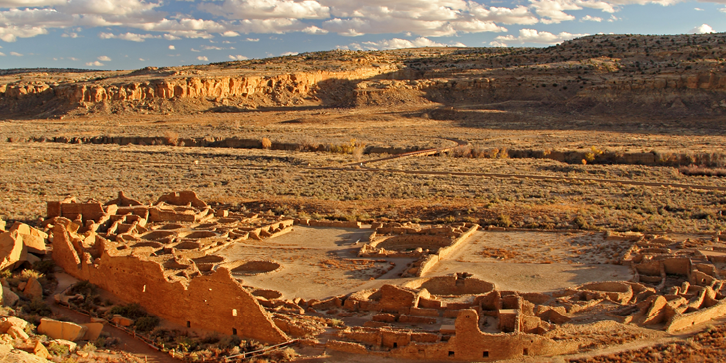 The Southwest is home to many places that are considered “sacred” due to their breathtaking vistas, perceived power and healing energy, spiritual connection, and ancient Native American belief system. Three of the most powerful spots include Chaco Canyon National Historical Park, Mesa Verde National Park, and Canyon de Chelly National Monument—which together seem to form a sacred triangle. Chaco Canyon and Mesa Verde are both included on the 23 World Heritage Sites in the United States—for having exceptional archeological relevance. To learn more about World Heritage status, visit the United Nations Education, Scientific, and Cultural Organization (UNESCO) website.

History
The topmost point of the triangle is Mesa Verde, known for its ancestral Puebloan cliff dwellings. It was in the 1880s that some cowboys first stumbled upon the cliff dwellings, kicking off an endless quest to understand these ancient and mysterious people. With no written evidence left behind, archeologists have scrutinized artifacts and structures—and found a people skilled and artistic, and able to make a living from a challenging environment. Ancestral Pueblo peoples settled in the area beginning in A.D. 600 and lived here for over 700 years, but it is the classic period (A.D. 1100-A.D. 1300) with elaborate stone communities built in sheltered alcoves, that fascinate modern visitors. As well as the knowledge that in the late A.D. 1200s, in just the span of a generation or two, they abandoned their settlement forever.

Nearly 5,000 archeological sites have been discovered atop mesas, within cliffs, and in the canyons at Mesa Verde, and nearly 600 cliff dwellings—all across more than 40 miles of roads. The rooms in the cliff dwellings averaged 6 x 8 feet, and housed 2-3 people. Other rooms on the upper levels and rear were used for crops; while underground ceremonial chambers (kivas) were established in front. The Ancestral Puebloans were farmers, supplementing beans, corns, and squash with deer, rabbit, and other game. Archeologists are able to discover much about their culture and habits through middens, which are basically piles of garbage! They tossed their trash close by the cliff dwellings, leaving behind broken pottery, tools, food remains—a virtual bonanza for scientists.

There is no clear answer why the Ancestral Puebloans deserted Mesa Verde by about A.D. 1300. Speculation points to drought and crop failure. Other theories point to social and political issues. It is said that the cliff dwellers of Mesa Verde traveled south into New Mexico, Arizona, and even Texas –and their descendants include the Hopi, Zuni, and Acoma.

Highlights
While there are many spots that you can view on a self-guided tour, some of the more fascinating ancient sites are worth spending a little extra to enjoy special ranger-guided tours. Here are a few examples:
Cliff Palace ($5 per person)
Considered Mesa Verde’s largest cliff dwelling, this one hour, 1/4 mile round-trip tour involves climbing 8-10 foot ladders and a 100 foot vertical climb—one hour drive from Visitor Center. A Twilight Tour ($20) is perfect for capturing dramatic photos.

Balcony House ($5 per person)
Climb a 32-foot ladder, crawl through a 12-foot long tunnel, and climb a 60-foot open rock face on this adventurous cliff dwelling tour. Tour is about 1 hour 15 minute drive from Visitor Center.

Since there is so much to experience at Mesa Verde, it is advisable to at least stay one night in the vicinity of the park. Morefield Campground is located four miles inside the park, with 267 sites for tents, trailers, and RVs. Includes a café, gas station, laundry, showers, and more. Far View Lodge is located 15 miles inside the park, featuring 150 rooms with traditional Western décor.

History
Located in northwest New Mexico (and the right bottom corner of the ancient triangle), Chaco Canyon is often cited as one of the most important archeological sites in the U.S. and for being the spiritual center of the Anasazi nation, and was occupied from A.D. 850 to 1250. The focus of many documentaries, Chaco Canyon has been a source of endless fascination for its “great houses” (massive stone structures that contained up to 700 rooms and dozens of kivas), for being a center of ceremonial, trade and political activity, for celestial alignments of its structures, and for being abruptly abandoned by its inhabitants. Examples of the sophistication of the center’s design include how the great houses were connected to each other by lines of sight, water-collection systems, and the way that Chaco itself was the center of outlying communities connected through a network of roads.

As mentioned, evidence suggests that Ancient Chacoan architects understood the seasonal patterns of the seasons and sky and built structures to capture the celestial alignments. And special park programs throughout the year highlight this idea. One such program occurs on the summer solstice, when visitors can join the park staff to observe the sunrise and the solstice marker of light inside the kiva at Casa Rinconada.

This very remote location, seventy miles from the closest town, almost demands an overnight stay in order to truly appreciate the many historic sites. In addition, the unpolluted night sky is another of the park’s draw for visitors. And it is the only national park to feature its own observatory, where visitors can see exceptional star-studded skies.

Chaco Canyon has been in the news due to an ongoing controversy concerning drilling in the Chaco region. The great historic value of Chaco was understood by President Theodore Roosevelt who declared Chaco one of the first national monuments deserving protection by the U.S. government. However, today the greater Chaco region is at risk of being injured by oil and gas interests. Federal land managers have decided to lease 26 parcels of land in the region. The drilling may destroy ruins not yet discovered and/or destroy the context and views of the site and its sacred places. The recent protests were discussed in the Santa Fe New Mexican.  And as we were finishing this article, it was announced that the leases have been put on hold! So it seems that activism it having an effect.

Pueblo Bonito
This is the mother lode—and not to be missed. View “great house” architecture in a 0.6-mile round-trip walk that displays the center of Chacoan culture.

Casa Rinconada and Small Villages
The trail through this site is ½ mile round-trip and climbs several short, steep rises and is an ideal way to learn about the various building styles of Chacoan culture.

Chetro Ketl
Another ½ mile round-trip walk at the second largest Chacoan great house, which contains a great kiva and an elevated kiva—12 feet above the canyon floor!

Don’t miss out on the Chaco experience—it is advisable to at least stay one night in the vicinity of the park. Camping is the only option within Chaco. The closest towns are Bloomfield, Aztec, Cuba, and Farmington—all about 1. 5 hours drive. Gallo Campground is the only option within Chaco Canyon, and is one mile from the Visitor Center. Tent sites and RV sites (no hook ups) are available, but may fill up on popular weekends and holidays, so reservations are strongly suggested.

The left-bottom corner of the sacred triangle is a unique park that is a joint operation with the Navajo Nation; and the National Park Service and the Navajo National share resources and work in partnership here. Spanning more than 83,000 acres, Canyon de Chelly National Monument was the home of the ancient Puebloans (5,000 years ago) and then the Hopi who lived among the cliffs. Much later the Navajo (Dine’) settled in the region—and the park is protected land for the Navajo people and their culture. Visitors enjoy rich archeological sites (dating back A.D. 350 – 1350) and the homes and farms of the Navajo that are visible from the cliff tops.

There is no entry fee to visit Canyon de Chelly—visitors can visit the overlooks, view the 800-foot sandspire known as Spider Rock, or enjoy a self-guided hike at the White House Overlook on the south rim, which usually takes about two hours and leads down to the White House Ruins. In addition, there are free ranger-led programs available Memorial Day to Labor Day. However, for a more unique experience, you can opt for a private hike, Jeep or horseback excursion, offered by authorized Navajo guides, allowing you to explore much more of the canyon—and see the evidence of both past and present dwellers. For example, Footpath Journeys of Canyon de Chelly says that visitors on their tours get to see hogans and sweat lodges, along with ancient ruins and fascinating rock art.

Cottonwood Campgrounds is managed by the Navajo Parks and Recreation Department (NPFD) and collects fees for camping. There are about 90 campsites and 2 group tent sites. There are three restrooms, but no showers or hookups. Call (928) 674-210 for details. A privately-managed campground along the South Rim Drive, Spider Rock Campground, offers tent, RV, and even Hogan accommodations, as well as showers for a fee.  You can find several hotels in nearby Chinle, AZ, such as the Best Western Canyon de Chelly Inn, Holiday Inn Chinle, and Thunderbird Lodge.

Final Thought
All three of these special sacred spaces contain ancient ruins and magnificent vistas that offer a personal spiritual journey and a chance to view starry skies and the wonder of the universe. And travelers find that a visit to these sites can nourish the soul. You can also score fee-free visits on the following days in 2018: April 21, September 22, and November 11. (That saves you $15-$20 at Mesa Verde and $20 at Chaco Canyon. Canyon de Chelley has no fees but accepts donations.)