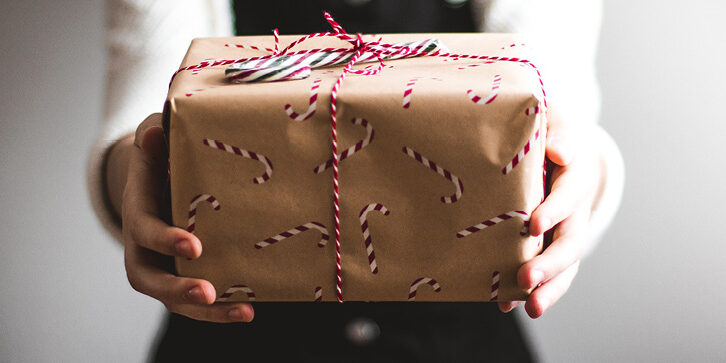 Whether you’re shopping for someone with a sweet tooth or a savory side, or someone across the country or down the street, there’s a New Mexico food product for them. With so many exceptional New Mexico foods available to take home, you might even find a few treats for yourself, too. Here are a few of the best made-in-New Mexico food gifts.

Most New Mexicans agree: Everything’s better with chile on it. That platitude holds true for Heart of the Desert Pistachios. Grown in the state’s pistachio capital, Alamogordo, the snack foods are dusted with red and green chile for just the right amount of piquant flavor.

Pecans are another of the state’s top crops, particularly around Las Cruces and the Mesilla Valley. Take home pecans from Salopeck Orchards, which has been in business for more than 50 years, dusted in festive red and green (chile).

Tis the season for donning your Christmas pajamas and gathering round for a holiday movie. Popcorn is the quintessential movie snack, and there are few better Land of Enchantment–centric popcorns than Albuquerque’s The Cornivore. Its traditional popcorn gets local twists with flavors such as green chile caramel, churro, biscochito, New Mexico Sunset (red and green chile cheddar), and Mexican chocolate.

The Farm Shop at Los Poblanos Historic Inn & Organic Farm, in Los Ranchos de Albuquerque, sells a number of items that can jazz up snack time or dinnertime. These include green chile jam, herbed pecans, and lavender honey.

A bevy of local coffee roasters across the state, from Ikonic Coffee, in Santa Fe, to Zendo, in Albuquerque, have bags of whole beans at the ready. For a taste of quintessential local flavor, New Mexico Piñon Coffee offers its signature coffee, as well as others with regional flavor, such as the cinnamon-sweet bizcochito. Through Red Rock Roasters, Adobe Coffee Co. also offers a piñon-flavored blend.

For next-level decadence at home, take home a chocolate elixir mix (a more traditional sipping chocolate made with water rather than milk) from The Art of Chocolate/Cacao Santa Fe. Two of its elixirs, Colonial New Mexican (with cinnamon and hazelnut) and Zapotec Tejate (with blue corn atole, almond, and vanilla), took home honors from the 2020 International Chocolate Awards, in Hanover, Germany.


If your giftee isn’t a chocolate lover, Buffets Candies offers a wide range of confections, including its popular piñon candies that bring a taste of New Mexico home.

Biscochitos are the official state cookie of New Mexico. Though they can be eaten any time of year, they’re synonymous with the holidays. Celina’s Biscochitos uses a family recipe for its traditional cookies and bakes several other tasty varieties, including red chile, green chile pecan, lemon, and chocolate chip.

What’s better than one New Mexico food item? A bunch of them. Several companies across the state create boxes and baskets mixed with a samplings of local goodies. Apple Canyon Gourmet sells a variety of gift baskets featuring its lineup of brands. The baskets include Santa Fe Seasons’ salsas, and soup and dip mixes; Santa Fe Mixes all-natural cocktail mixes; and other items.

Made in New Mexico’s gift baskets include a variety of the items already described here, such as Heart of the Desert pistachios and New Mexico Piñon Coffee, as well as other favorites like Heidi’s raspberry jam and Santa Fe Culinaria’s blue-corn pancake mix.

All of the New Mexico food items featured here are available to order online. So, happy holiday shopping!