4 Unconventional—but Awesome—Ways to Cook a Turkey

You are here:
FoodHolidays & Celebrations 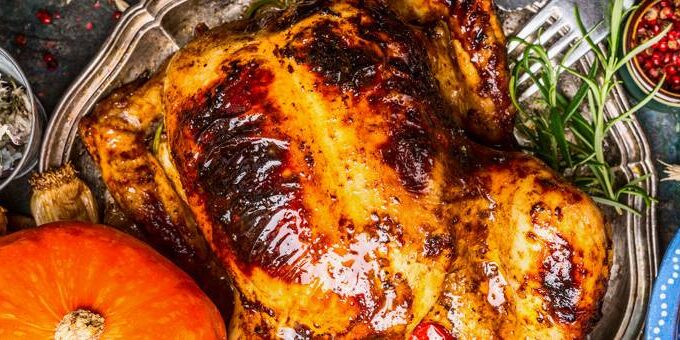 Who said a Thanksgiving turkey has to be roasted in the oven? There are plenty of delicious ways to prepare the day’s centerpiece including smoking, braising, grilling, and yes, even deep frying. If you want to be a little more creative in the kitchen this year, here are four savory turkey-preparing methods to try.

Smoking allows you to infuse tons of flavor into the meat, which is great because turkey is naturally pretty bland. That being said, because it’s pretty bland, even the mildest flavor addition is discernible. To make sure you don’t go flavor overboard, use a light wood, like cherry or apple. Most of the fruit woods will do.

If you brine the turkey before smoking it—and most cooks advise doing so—you’ll not only tenderize the meat, but add even more flavor, depending on the ingredients you use.

Smoking also lends a real wow factor to the presentation by giving the skin a beautiful, deep mahogany color.

You’ll need a proper smoker, unless, however, you’re confident enough to rig up your own grill. If so, Reviewed.com has a helpful tutorial on how to turn your grill into a fully functional smoker.

The number one complaint among people who don’t like turkey is that it’s dry, dry, dry. Braising your bird, according to some cooks, is the best way to ensure that the meat is juicy and tender. The downside is that braising requires taking the turkey apart, which means no beautiful golden centerpiece for your spread.

But if you’re a foodie who’s up for the sophisticated challenge of preparing a juicy bird, or you’re cooking for people whose love for turkey has evaporated, braising might be your method of choice.

It’s an unconventional way to prepare a turkey to many, but it’s a time-honored tradition in the South, and lauded by foodies who say it is the most delicious way to cook a Thanksgiving bird (arteries be damned.)

And truth be told, what you gain in calories, you save in time. After brining the bird (which can take 8-16 hours, depending on the recipe), you toss it in the deep fryer for less than an hour.

You’ll need a large pot, 30-40 quarts should do, and a propane burner. You can also buy a deep fryer just for turkey for under $100, like this one.

It should go without saying that deep-frying a turkey should only be done outdoors, but for the rebellious types who may be reading, here’s a friendly reminder: don’t deep-fry a turkey indoors. Just don’t. People may say it’s OK, but it’s not, especially if it’s your first time deep-frying a turkey.

Of all the non-traditional ways to cook a Thanksgiving turkey, grilling it is the trickiest, but it’s not impossible to turn out a delicious bird.

For starters, grills do not spread heat as evenly as ovens; second, the meat tends to dry out faster on a grill; and third, it’s tough to catch those must-have turkey drippings.

If you do go the grilling route, keep a close eye on both the temperature of the meat and the grill (Amazon sells grill thermometers for under $10), and place the turkey in a disposable aluminum pan to capture the drippings.