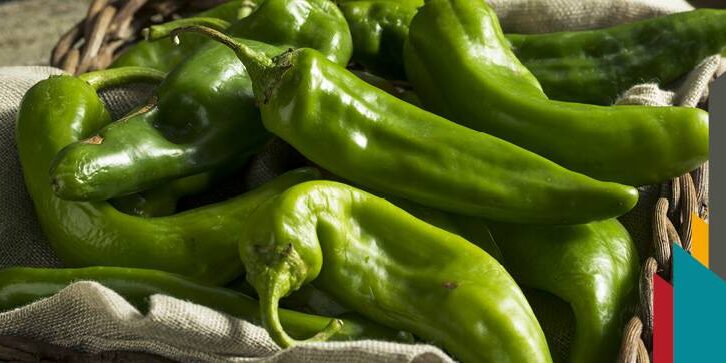 With the changing season upon us, the first thing in New Mexicans minds isn’t back-to-school time but chile shopping! Did you know that according to the U.S Dept of Agriculture about 9,200 acres of land in New Mexico are dedicated to the state’s signature crop (green and red) and the state produces about 60,000 tons of chile per year, which is estimated at more than $50 million? Luna County leads the way in acreage and production followed by Doña Ana County, where Hatch, the self-proclaimed “chile capital of the world,” is located.

Las Cruces is the heart of chile country, with its close proximity to Doña Ana and Luna Counties. It is appropriate then that Las Cruces is home to the 47-foot cement “World’s Largest Chile Pepper” and drops an illuminated chile on New Year’s Eve. It is also home to New Mexico State University’s Chile Pepper Institute.

The popularity of “New Mexican chile” is not just a regional obsession as its tantalizing flavor is popping up on menus from coast to coast—and is growing in demand. While many imposters are jumping on the New Mexico chile bandwagon, chile connoisseurs take pride in their New Mexico chile knowledge—and many New Mexicans have their personal favorites.

Take for instance, Hatch Valley chile—heralded for both green and red peppers. These coveted chile peppers are for many an essential ingredient in any New Mexican kitchen. (There are actually a number of variations under the “Hatch” label—and the Chili Pepper Institute is credited with many of the Hatch creations.) But common to all Hatch chile is an extraordinary taste (described as smoky and buttery) and rich history. Hatch peppers have a very short cultivation season in late summer, and are by and large roasted and put into the deep freeze to use throughout the year.

Are you a Hatch fan? Why not consider attending the Hatch Valley Chile Fiesta—taking place September 1-2, 2018.  Fiesta-goers can sample chile recipes, see the chile fiesta queen get her crown, or make a chile ristra to take home—and enjoy the sounds and sights of a variety of entertainers and musicians.

Chimayo is known for its red chile—grown in small batches and priced at more than $40 a pound. Described as tart and citrusy with a slow burn—it is grown from original heirloom seeds that are passed down from generation to generation. Batches are oven-roasted, giving the chile distinct toasted flavor. And certainly there are many other locations throughout the state where chile is born and raised. Farmers from the Espanola Valley to the Socorro area are garnering praise for their tasty chile.

But how do these various locations differ in flavor? According to Sunset magazine, northern chiles tend to be smaller, skinnier, and more twisted than southern types with an intense flavor, flowery aromas, and varying heat. “Southern chile are bred for greater yield and consistent flavor—fleshier, smoother, and easier to peel.”

Whatever your passion—red, green, or Christmas—we can all agree that the aroma of roasting chile and  abundance of scenic ristras signal a change of the seasons, and the imminent return of the wonderful fall harvest.